Home › Uncategorized › All the Loving Couples

All the Loving Couples 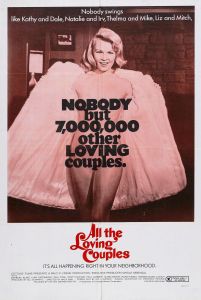 The promotional materials for “All the Loving Couples” suggest there are 7 million swinging couples in the world. Hey, who says progressivism is dead?

“All the Loving Couples” is about eight such swingers, four suburban couples who gather on a Friday night for an evening of boozing, billiards and boinking each others’ partners.

Despite the racy subject matter, “Couples” is not a sleazy film, but it is hampered by some pretty terrible filmmaking decisions and a dreadful soundtrack that does not let up for one second — you’ll giggle the first time you hear Les Baxter’s obnoxious title tune and want to slit your wrists the 58th time it’s played.

If you think that’s painful, the film is also littered with a dozen or so apropos-of-nothing commercial parodies starring members of the film’s cast, poking fun at such bogus products as Pit Stop deodorant (groan) and Slick hair gel (“It’s not how slick you make it, it’s how you make it slick”). The ads are completely unnecessary, and only serve to stretch the film to feature length.

With this much stupidity at work, it’s hard to gauge exactly what, if anything, screenwriter Lee V. Gordon is aiming to suggest about the swinging culture. Mostly, “All the Loving Couples” feels like a glamorization of the perverted pastime, but if these gatherings are truly as boring as portrayed by the movie, I can’t imagine the swinging community will be gaining new members any time soon.

“ALL THE LOVING COUPLES”